I have been worn out with the Assassin’s Creed series because of the fact that it comes out yearly. However, there is no denying that the series does improve with each and every installment. The newest game, Assassin’s Creed IV: Black Flag, seems to be the most interesting Assassin’s game in a long time.

You play as Edward Kenway, Grandfather of Assassin’s Creed 3’s Conner Kenway. Out of all the other Assassins in the series’ past, Edward is already the most likable in my book. He drinks, he gambles, he flirts and completely embodies the Pirate persona. In the developer video, the gameplay seems to be a bit of the same with the exception of different environment’s to sneak around and upgraded Naval combat. 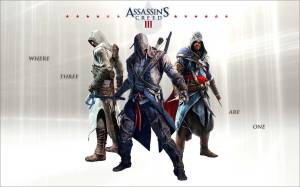 In an interview with Kotaku‘s Stephen Totolio, Ubisoft CEO Yves Guillemot said that the company has three Assassin’s Creed games currently being developed. This fits with a new installment in the series coming out every year. While I am opposed to the annualization of any game series (make me miss you), Guillemot does give some interesting comments to assure that the quality of the Assassin’s Creed games won’t be disrupted with so little time between their releases. He states:

“We are making sure the teams who are creating the different iterations have enough time—two years, three years, so that they can take risk and they can change the concept enough so that it can be appealing and fresh,”

I have no doubt that the quality of the will improve. However, I feel like franchise fatigue is not just about quality, it is about being fed too much of the same thing. There no anticipation for the next game, especially when you know another one is around the corner. Anyway, my predictions for those three Assassin’s Creed games are Assassin’s Creed IV, Black Flag, Assassin Creed Liberation 2 and Assassin’s Creed V. Any other guesses?