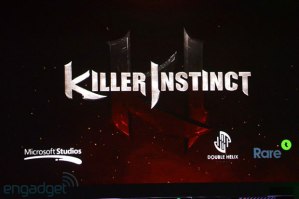 While the Xbox One may be facing a storm of backlash because of their anti-consumer polices, there is no denying that most of the games they have brought to E3 are phenomenal. Among those games is the new Killer Instinct by Double Helix. It is really interesting to see where Microsoft is going with this new iteration of Killer Instinct.

Since its announcement, it has been revealed to be a free-to-play digital download only game, with one character (Jago) available to play as. While you can fight against every other character in the game, gamers will have to pay to play with the rest of the roster. Despite the weird approach Microsoft is taking with this fighter, the heavy ink art style and fast and frantic gameplay, Marvel vs. Capcom style, makes the game look intense. Also there is no denying the allure of hearing COMBO BREAKER during a fight.

Killer Instinct launches day one with the Xbox One.